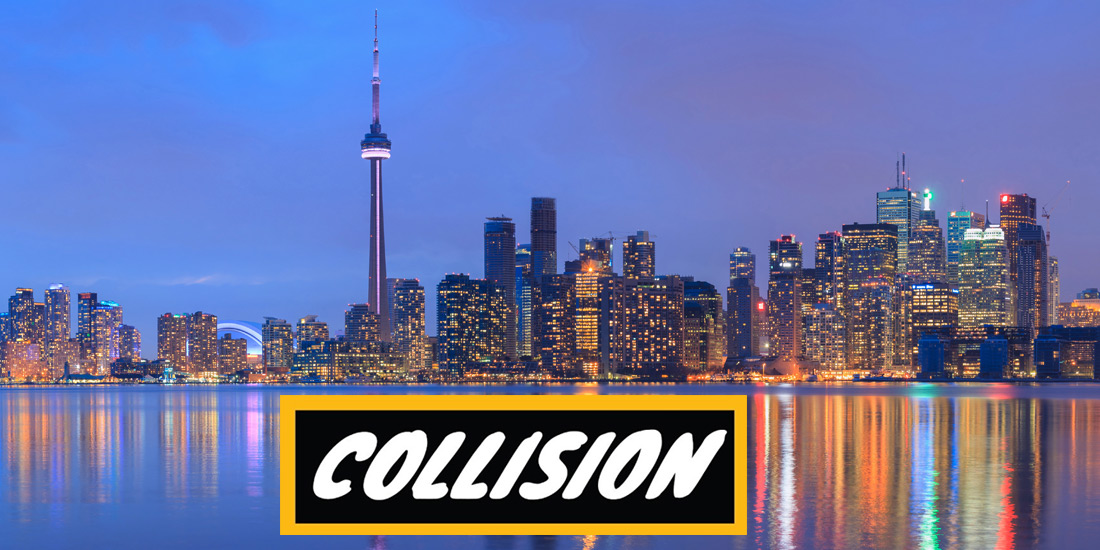 This week I attended the Collision Conference 2019 in Toronto.  Over 25,000 attendees from 125 countries, 730 speakers, and 1100 startups. Wowed by the amount to speakers, sessions, and topics. Felt like I was drinking from a tech fire hose for three days.  I learned a lot.  10 things I’d like to share:

Looking to build an application but know nothing about technology?
Check out London, UK based engineer.ai. They’ve productized software development by letting you choose the type of application you want to emulate, the features in the application that are important to you, the platforms you might want it on, and the maintenance you require.  Oh yeah, and you can see how your pricing and timeline will change in real time. Pretty cool stuff.

So Happy for Lisa Denis of Emoggo
Silicon Halton supermember Lisa Denis was selected for the COLLISION ALPHA Program – giving the spotlight to early-stage startups with outstanding potential and connecting them to influential names and resources.  Emoggo is the better way to explore and experience nearby places to shop, eat, and connect.  Check her out on Twitter or the EMOGGO website. 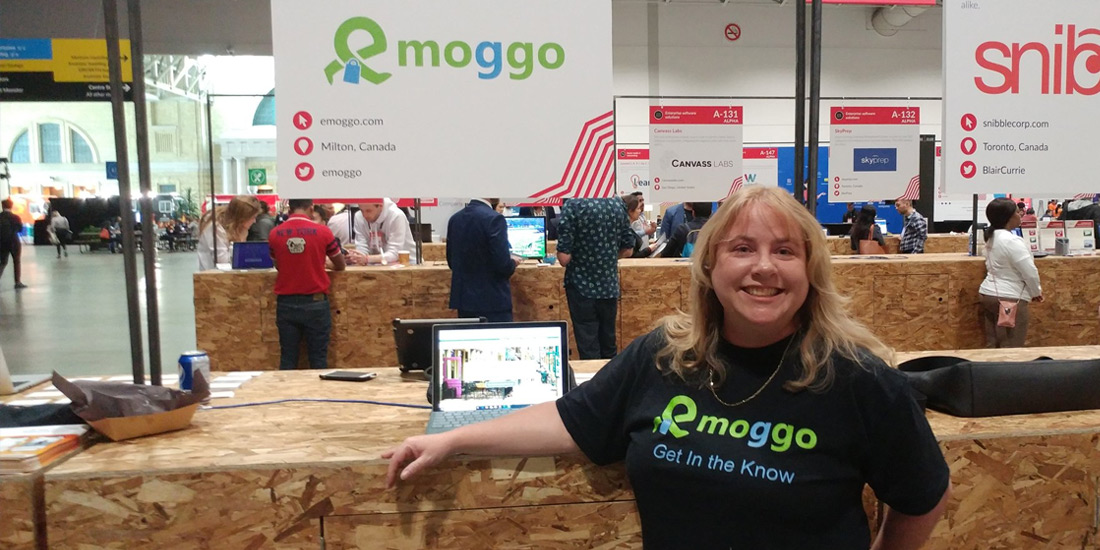 Got aching feet? Want comfortable and supportive custom-fit footwear?
Check out Vancouver, Canada based wiivv.com. They build custom fit footwear from your phone. You download their app and take pictures of your feet. They digitally map your feet to 200 points. Then, they create custom sandals or orthotics at a great price.  They’re a startup that has partnered with Dr. Scholls to deliver custom 3D printed inserts for their customers. Canadian startup helping a 100 year old company innovate.

Have you seen the crazy filters on Snapchat that change your gender? They are agugmented reality filters.
Listened to a fascinating conversation Eitan Pilipski, VP of Camera Platform, Snap Inc. talk about how they see themeselves as a camera company that is reinventing the camera and putting augmented reality into the hands / eyes of their customers.  In the future, these crazy fun filters may morph into educational / industrial uses.

Cyber attacks and data breaches cost consumers, companies and countries billions of dollars annually.
Hacked and dumped, or leaked identity information is proliferating in the surface, social, deep and dark web and bad actors are using this information to launch new attacks. Monical Pal, CEO of 4iQ spoke of how her company continuously collects exposed identity information found in open sources, curates the collections of compromised identities, and then helps protect consumers from identity theft and investigate fraud, financial crimes and other threats.

Is Entrepreneurship in Crisis? Did you know there were more entrepreneurs in 1970’s?
Canada’s Tobias Lütke, founder and CEO of Shopify, one of the world’s leading commerce platforms, discussed the current state of entrepreneurship and the most pressing issues facing today’s brands, from small and medium businesses to major retailers.  His mission, make it easy for everyone to become an entrepreneur, whether they understand tech or not.  So far, he has 800,000 customers and is doing over 1 billion in revenue. 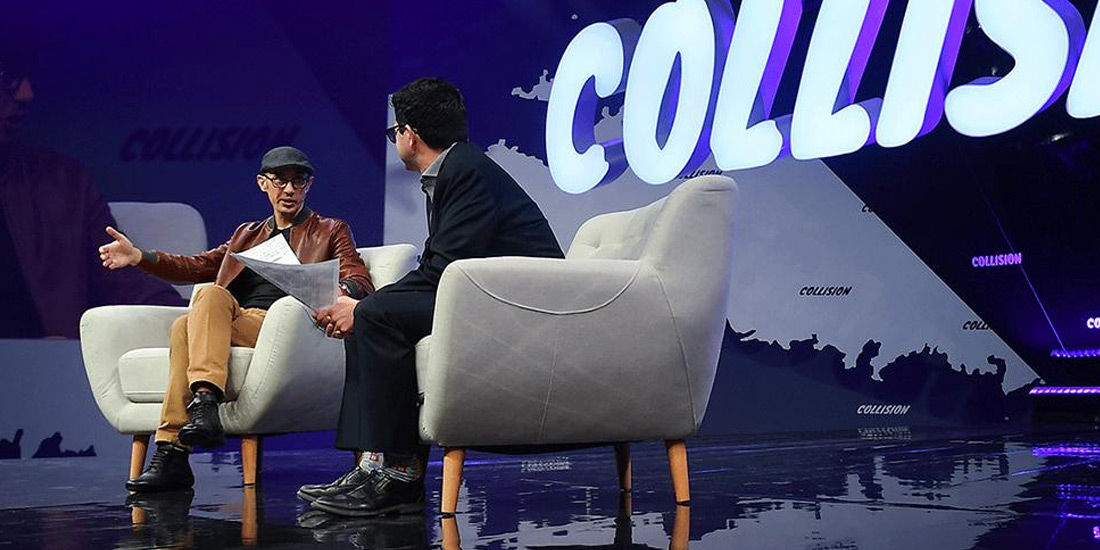 Saving the Planet With Technology
Jennifer Marsman from Microsoft discussed their AI for Earth program – $50 million in grants to projects that use artificial intelligence to address four critical areas that are vital for building a sustainable future – climate, agriculture, biodiversity, and water.

Who Is Afraid Of Automation?
Will humans be replaced by robots? Well, it depends. Navdeep Bains – Minister of Innovation, Science and Economic Development, Government of Canada; Dmitry Grishin – Founder, Grishin Robotics; and Daphne Koller – CEO, Insitro had a really good discussion about the impact of automation on our jobs. Learned more about Canada’s Innovation and Skills Plan – and the safeguards they tried to put in place to ensure people and reskilling come first in the world of automating everything. And, also learned that Canada had just signed in May 2019 the Declaration of the International Panel on Artificial Intelligence (IPAI), and released further details on the Panel that will see Canada and France working together to guide the responsible development of artificial intelligence. The Panel will be an organization dedicated to AI and plans to bring together some of the world’s “greatest global AI experts.” It hopes to be a global reference point in the development of AI, rooted in human rights, inclusion, diversity, innovation, and economic growth.

2019 COLLISION PITCH Champion
Watched the finalists of the COLLISION startup competition battle it out for the title of 2019 PITCH champion. Finalists included: Chelsea Fawn Briganti from Loliware – biodegradeable seaweed straws; Dickson Nsofor from Korapay – Africa Payment Infrastructure; and Phaedra Randolph from Spero Foods – dairy and eggs reinvented.  Great to see Loliware win to save the planet! 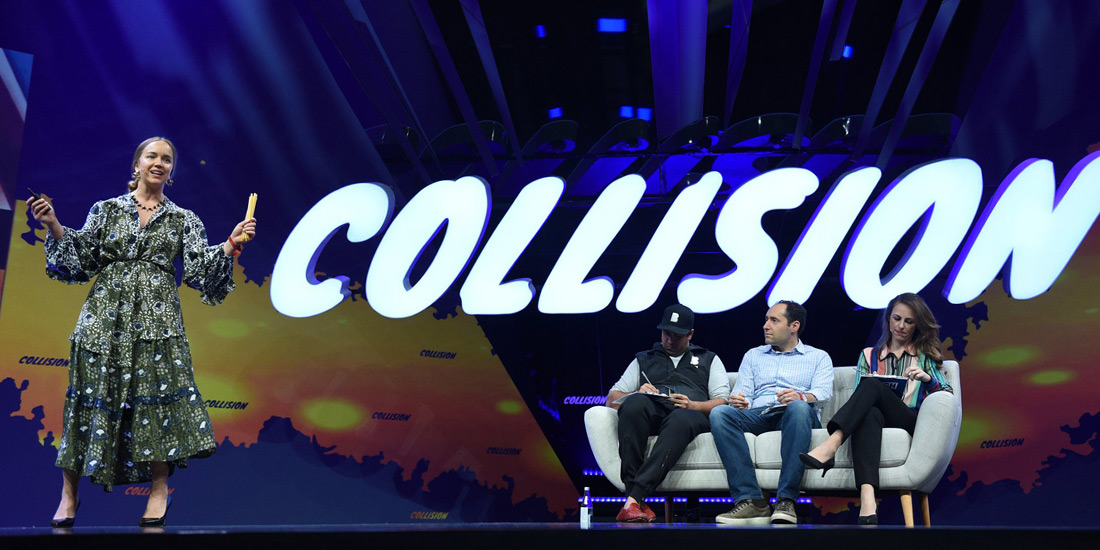 And so many sessions I missed. Just not enough time to get to all the parallel sessions.
But I understand that the COLLISION Team will be putting videos up of many of the sessions on the COLLISION YouTube Channel.
Will I be there next year?  You bet – already in my calendar!

Don Tapscott is one of the world’s leading thinkers on Blockchain.  He’s also the co-founder of the Blockchain Research Institute – an independent, global think-tank.  In fact, according to Thinkers 50 – he has been ranked #2 in leading Global Thinkers.

This 20 minute Ted Talk is one of the clearest explanations of Blockchain.  Interesting, insightful, and easy to listen to.

A blockchain is a distributed software network that functions both as a digital ledger and a mechanism enabling the secure transfer of assets without an intermediary. Just as the internet is a technology that facilitates the digital flow of information, blockchain is a technology that facilitates the digital exchange of units of value. Anything from currencies to land titles to votes can be tokenized, stored, and exchanged on a blockchain network.

How Does That Impact Ecommerce?

According to this Forbes article by Giri Devanur:

Monopolies will become decentralized.  Right now, a few global players dominate ecommerce (Amazon, Alibaba etc).  There are hardly any challengers to existing players, and the cost of change is too high. Blockchain technology essentially decentralizes control and ensures that trust is achieved without the need for a centralized power. It also means greater transparency and power to the consumer.

Regulatory Changes.  Data protection laws (such as GDPR) will have an impact on blockchain technology and e-commerce players. Monopolies in the e-commerce world will come under different kinds of attacks.

Customers are becoming more aware of monopolistic powers.  They are taking a deeper interest in knowing the origins of a product, its sustainability and so on. This will result in a shake-up of e-commerce players, and a lot of vendors may get filtered out. 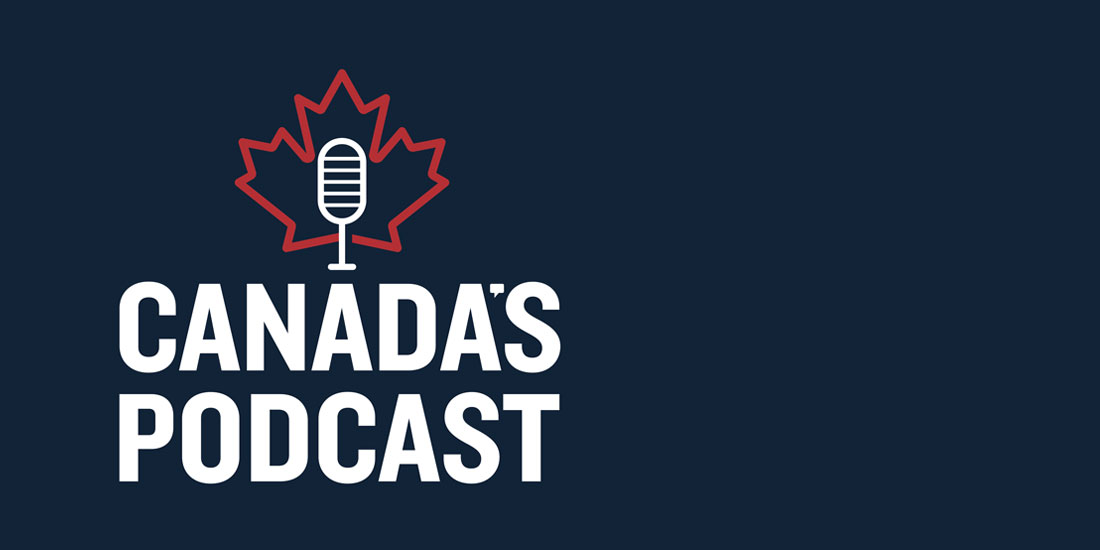 Canada’s Podcast interviews entrepreneurs and business leaders in Canada to keep them informed on what’s going on throughout the country and globally, enabling everyone to connect and network with their guests. Each episode interviews a unique Canadian entrepreneur from each city and provides both a national and international platform for them to discuss their business and journey.

Last week, I was interviewed by Phillip Bliss and discussed my entrepreneurs journey. Listen to the podcast here > 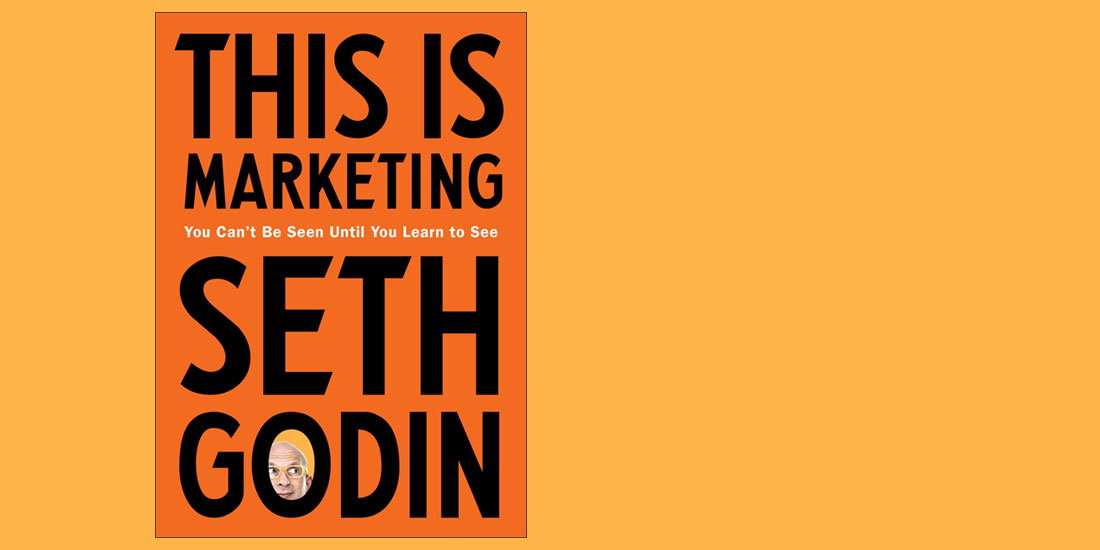 I’ve read or listened to 7 of Seth Godin’s books.  Each and every one has had a profound impact on my thinking.  The Latest – This Is Marketing – is really important. 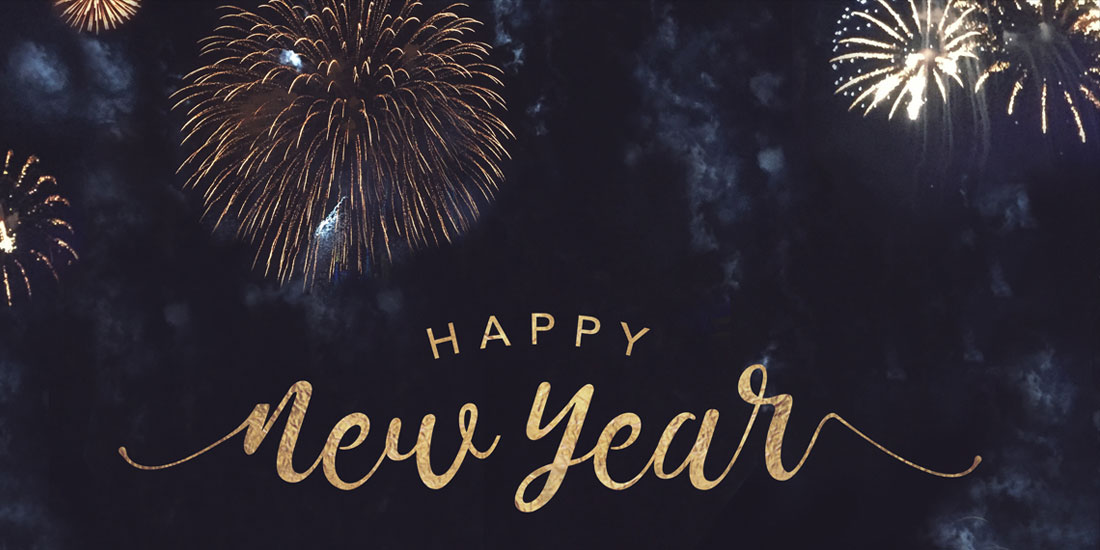 Everybody has the same 365 days in a year.  It’s what you do with them that is important.

As we set New Year’s resolutions, a big part of business focus is what we’re going to do differently in those 365 days.  My focus for this year:

How about you?  What are you going to do differently with your 365 days?

[bctt tweet=”Happy New Year. Everybody has the same 365 days in a year. It’s what you do with them that is important. Fine tuning my plans for 2019!” username=”reemaduggal” via=”no”]